"Fifty percent of Catholic-raised individuals under the age of 30 identify as former-Catholics (Murphy, 2015). Such drastic retention rates call for exploration of faith formation norms within the Catholic Church to determine predictors of religiosity in adulthood. Research suggests adult-youth relationships play an instrumental role in developing faith identity among youth (Smith & Snell, 2009). Thus, the present qualitative study explores adult behaviors that may influence participants during their adolescent faith development. Twenty-four college students (12 Catholics and 12 former-Catholics) were asked to describe relationships with adults who played a role in their views and understanding of religion during their upbringing. Thematic analysis was used to identify themes regarding supportive and unsupportive behavior of adults modeling (or not modeling) a Catholic lifestyle. Findings include patterns and emergent themes in the data, as well as implications for mentoring Catholic-raised youth." 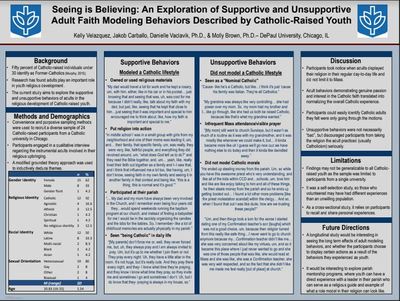