Exploring an Immersive Exclusion Paradigm, an Alternative to Cyberball.

This study tested a new immersive social exclusion paradigm which was developed as an alternative to the Cyberball paradigm. Participants in the lab (N = 74) were told they would be working with two other students in separate rooms through an online chat board. Participants were asked to record a video of themselves responding to an icebreaker prompt where they shared their favorite childhood television show. Participants in the exclusion condition watched pre-recorded videos of the confederates in which they expressed nostalgia for the same show. The pre-recorded confederates in the control condition discussed separate television shows. Afterwards, participants fulfillment of psychological needs was surveyed. In the exclusion condition, participants demonstrated a reduced sense of belonging, control, and meaning in life. Overall, they reported significantly less fulfillment of their self-related needs than participants in the inclusion condition. The results imply that this paradigm effectively induces feelings of social exclusion. 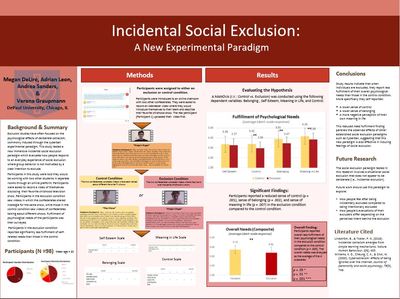