Interfaith Dialogue: The Exposure of Former-Catholics to Non-Catholic Religious Practices and Beliefs

Fifty percent of Catholic-raised individuals under the age of 30 identify as former Catholics (Manhlos-Weber & Smith, 2018). This group usually transitions to identify as: “Nones”, Atheists, or Agnostics, while others convert to other organized religion. As such it is important to explore the non-Catholic religious exposure of Catholic-raised individuals. This study explores the exposure of former-Catholics to non-Catholic religions during their experiencing being raised Catholic. To name a few, this exposure could be from a teacher in the classroom, friends, classmates, or the internet. 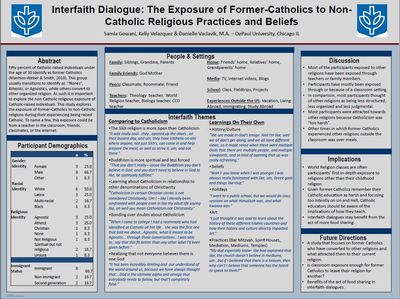