The Relationship between Maternal Expressed Emotion and Adolescent Perfectionism

Individuals vary in the degree to which they perceive that others expect them to be perfect. Those who do are considered to be high in a multidimensional construct called perfectionistic self-presentation (PSP), which is manifested, in part, through masking flaws and imperfections (Chen et al., 2015). PSP has been associated with depression, low self-esteem, and feelings of shame (Asseraf & Vaillancourt, 2015). Research has explored family and environmental variables of perfectionist adolescents (DiPrima et al., 2011), but has yet to explore how parental attitudes towards adolescents influence the development or maintenance of PSP. Poor mental health outcomes have been documented for individuals whose relatives display high levels of Expressed Emotion (EE), including criticism and emotional over involvement (Peris & Miklowitz, 2015). Although Latino parents are less likely to be classified as high in EE than their European American counterparts, the relationship of EE and PSP has not been explored among this group. To address this, associations between one of the PSP dimensions and a component of EE will be examined among 207 adolescents who are predominantly Latino, low-income and at risk for depression. We predict that higher perceived criticism (EE) from Latino parents will be associated with higher nondisplay of imperfection (PSP). 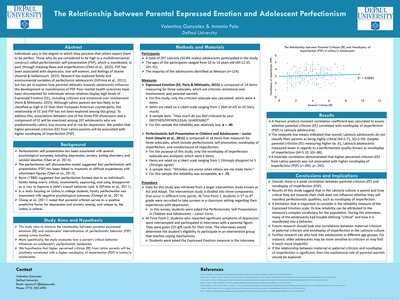