Ethnic Socialization and Psychosocial Outcomes Among Children and Adolescents: The State of the Field

The process by which parents teach their children about values, meaning, and information on race and ethnicity is referred to as ethnic/racial socialization (Hughes et al., 2006; Parke & Buriel, 2008).Understanding such practices is important in knowing how they impact psychosocial and academic outcomes as the racial/ethnic makeup of the U.S. is changing. Predictions indicate that the majority of the US population will be of ethnic minority background by 2043 (US Census Bureau, 2012). This meta-analysis aims to identify the differences in ethnic/racial socialization practices and outcomes among ethnic minority groups. The present study will outline the methodology and outcomes of the literature search by presenting the current state of the field in ethnic/racial socialization as it relates to psychosocial and academic outcomes. Studies included in this analysis consist of published articles obtained through literature searches using PsychInfo and Google Scholar and which met the following inclusion criteria: 1) conducted in US; 2) age 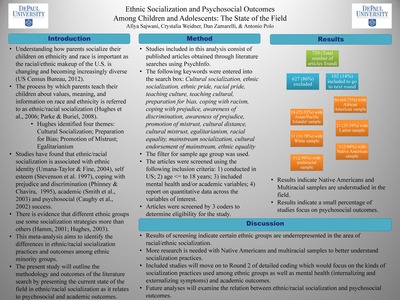