The success of rape crisis centers has been documented to help survivors experience less distress after interactions with the legal system (Campbell, 2006). Due to high turnover rates in rape crisis work, considering the impact on rape survivor advocates is important. Advocates are exposed to trauma (Ghahramanlou & Brodbeck, 2000), which may lead to advocates feeling overwhelmed, experiencing burnout, and leaving the field (Yanay & Yanay, 2008; Ullman & Townsend, 2007). While replication is needed, being a survivor was found to be related to levels of negative outcomes, such as secondary traumatic stress (STS) and vicarious trauma for advocates (Dworkin, Sorell, & Allen, 2014; Ghahramanlou & Brodbeck, 2000). Jenkins and colleagues (2011) reported that 19% of advocates in their sample were motivated to volunteer by personal experiences and being motivated by personal experience was related to higher levels of STS and positive changes. Due to higher rates of STS related to being a survivor and being motivated by personal experiences, 6 survivors of sexual assault were interviewed about their motivations to volunteer. As part of a larger study, participants were recruited from Chicagoland rape crisis centers via e-mail. Findings were analyzed using thematic analysis (Braun & Clarke, 2006). 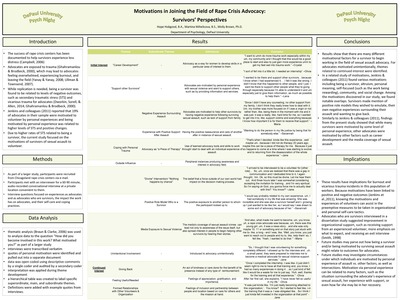