An innovative way to prevent depression among low-income African American girls has been developed through a mother-daughter dyad intervention, The CITIES Mother-Daughter Project. Evidence supports that this population is considered high-risk for developing depression and unlikely to receive mental health services (Grant, Lyons et al., 2004). The purpose of this specific study was to examine the self-reported values of anxiety and depression among the female participants. A regression analysis was employed in order to understand the psychological factors and environmental stimuli that influence a pre-adolescent's anxious tendencies. Going against Albert Bandura’s social learning theory, results disclose the mother’s rating of anxiety did not significantly predict their daughter’s rating of anxiety. Further, a dependent samples t-test was then employed to compare anxiety and depression ratings. Results yielded that anxiety and depression values are moderately correlated and that the two measures are significantly different from each other. Results display the importance of the intervention. As the mothers serve as a collaborator and co-therapist of the intervention to their daughter, it is important that the daughters’ support system is not perpetuating unhealthy lifestyles. 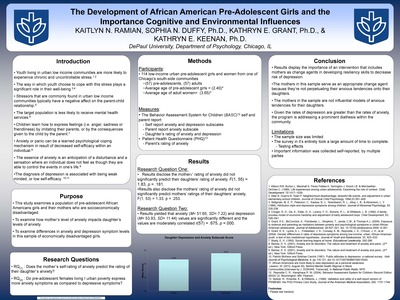