Political affiliation as it pertains to studying aggression

This Independent Study focuses on people’s political association and how that is reflective of aggressive behavior. We measure aggression by weighing hot sauce the participant allocates after that participant receives a sense of rejection. After the study we ask them, in a demographics survey, where they align on a seven point political spectrum –– 1 strongly liberal, 2 liberal, 3 learning liberal, 4 moderate conservative, 6 conservative, 7 strongly conservative. In the data sets, I group 1-3 (1) as liberals, 4 (2) as moderate, and 5-7 (3) as conservative. My initial hypothesis predicted that, if moderate, these participants would be less aggressive than those of the political spectrum extremes. However, after looking at the data via SPSS, I found that aggressive behavior (y-axis) has a more gradual increase along the x-axis, political affiliation. 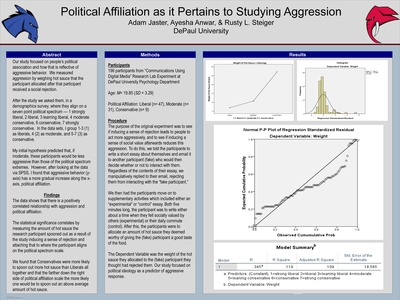