Do people justify, qualify or condemn the American system?

We measured Whites’ and minorities’ perceptions of the American system—the extent to which they justified (i.e., perceived it as just and fair for everyone), qualified (i.e., perceived it as functioning better for some groups more than others), and condemned (i.e., perceived it as broken) the American system. Research has examined system justification and condemnation; however, this is the first study that examined system qualification. We collected survey data from two samples: college students (N=203; 65 Blacks & Latinos, 136 Whites) and non-college adults (N=110; 28 Blacks & Latinos, 78 Whites). In both samples, we found that participants qualified the system the most, followed by system condemnation and then system justification, regardless of their race. Among non-college adults, there was an interaction showing that Whites and minorities justified and qualified the system similarly; however, Blacks and Latinos condemned the system more than Whites. Although not significant, the pattern of the student data was similar to the non-college adults. These data demonstrate that Whites and minorities similarly recognize that the system functions better for some groups more than others; however, minorities are more likely than Whites to perceive that a biased system indicates a broken system. 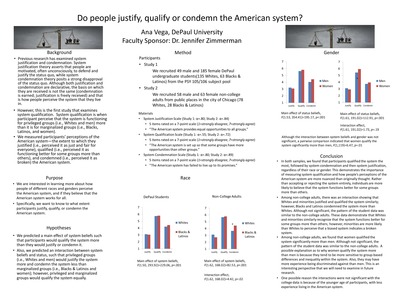