The US Supreme Court ruled in Bostock v. Clayton County (2020) that employment discrimination based on sexual orientation is illegal because it’s a form of sex discrimination. For example, employers who fire a female for dating women but don’t fire a male for dating women are discriminating because of the employee’s sex (if she were male, she would not be fired for dating a woman). However, Justice Alito claimed, “An employer who discriminates on this ground might be called “homophobic” but not sexist” (2020, p. 21). In our study, we tested if sexist attitudes predicted prejudice towards gays/lesbians after controlling for variables that could provide alternative explanations for this relationship. We used data from the American National Election Studies (ANES, 2016), a publicly available dataset from a national political survey. Multiple regression analysis was conducted, with prejudice towards gays/lesbians as the dependent variable and sexist attitudes as the predictor variable. After controlling for participants’ political ideology, religiosity, social dominance orientation, authoritarianism, symbolic racism, age, income, education, and gender, sexist attitudes still significantly predicted prejudice towards gays/lesbians (although the effect size went from moderate to weak). These findings highlight how people’s prejudice towards gays and lesbians might also be called sexist. 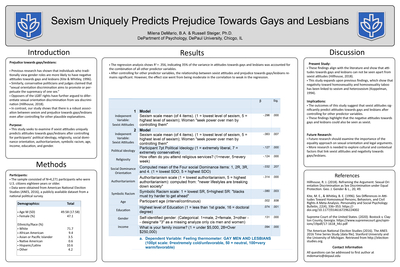