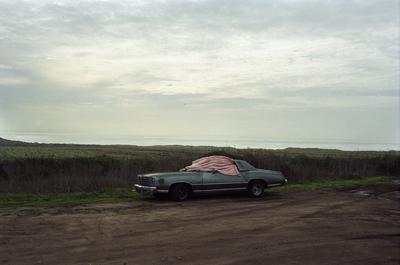 Looking For Asian America: An Ethnocentric Tour From one of the United States' most diverse areas (Hilo, Hawaii) to its least (Slope, North Dakota), Huie and his wife Tara spent nine months traveling through 39 states on an "ethnocentric" tour of their homeland. Some of the sights include a Vietnamese Elvis, a Hmong enclave in rural North Carolina, a meditating Falun Gong protestor in front of the Washington Monument, a bubble tea valley girl, ABCs (American-born Chinese), FOAs (fresh-off-the-airplane), and a self-described red-neck Chinese restaurant owner near the Okefenokee Swamp. The result is an idiosyncratic and personal odyssey through an America where Asians, particularly Chinese, happen to be in the majority.

"I am the youngest of six and the only child not born in China. For most of my life I've looked at my own Chinese-ness through a white, middle-class prism. Outside of my family, people who looked like me were hard to find in Duluth, Minnesota, or in the popular culture I embraced. My mom made me pray to Buddha every New Year, but it was Jesus Christ Superstar who became my cultural touchstone. At times my own parents seemed exotic and yes, foreign, to me.

They also became my first photographic subjects. Twenty-five years later I embarked on a nine-month, cross-country odyssey, with a distinct awareness of being a hyphenated American. It was refreshing to look at my home country through my particular bi-focal ethnocentric lens and see the exotic as familiar, and vice-versa. What I found was a place that exists mostly under the prevailing cultural radar, but is as American as Buddha bars, Bruce Lee dolls, and chop suey." -Wing Huie