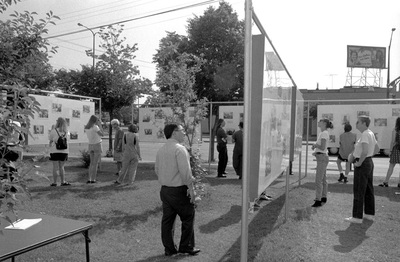 Frogtown: Photographs And Conversation In An Urban Neighborhood

Wing's first major project was a groundbreaking outdoor installation on a vacant grass lot in Frogtown, one of the oldest neighborhoods in St. Paul and also home to the largest Hmong community in Minnesota. He spent two years photographing residents on the street, in their homes, backyards, at barbecues, on their front porches, at play and during worship.

This unique exhibition was open 24 hours a day and it attracted people to a neighborhood they might not otherwise have visited. In this neighborhood, as in many core urban districts nationwide, incomes are low and the crime rate is high. Huie approached Frogtown citizens as individuals, frankly yet compassionately. His photographs reveal his sense of kinship with them and transmit the sense directly to the viewer.