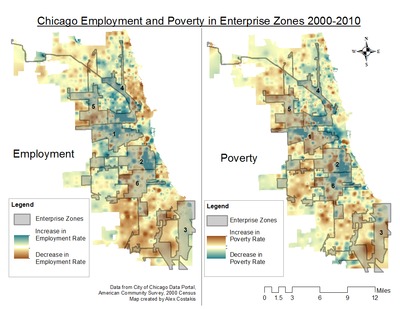 These maps show changes in poverty and employment from 2000-2010 in Chicago. The six Chicago enterprise zones are overlaid, displaying how poverty and employment have changed inside and outside of these zones, demonstrating the importance of evaluating local economic development policies at small geographic scales. Zones 1 and 4 show corresponding increases in employment rates with decreases in poverty rates, seen in blue. Alternatively, zones 3 and 5 show concentrated decreases in employment and corresponding increases in poverty, seen in brown, with Zones 2 and 6 having contrasting growth and decline. These maps can help program administrators identify areas that need new economic development strategies.

To create the maps, poverty and employment data from the 2000 Census and the 2010 American Community Survey 5-year estimates were joined with separate 2000 and 2010 census tracts from the Chicago Data Portal, and tracts were converted to centroids. Isopleth maps were created for 2000 and 2010 poverty and 2000 and 2010. Map algebra subtraction was used to create the two maps presented here, and they were classified by standard deviation to show relative change and account for citywide changes.