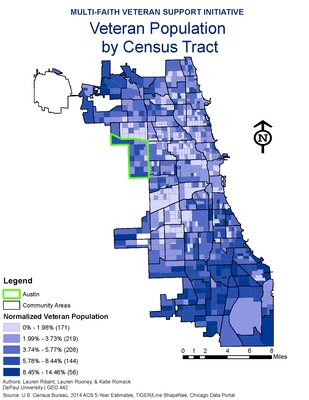 This map is produced as part of the project in collaboration with the Multi-­Faith Veteran Support Project (MVP) through the Irwin W. Steans Center. The project focuses primarily on the mapping of the existing partnerships MVP had already established and known in this project as the "Core Resources". The project involves mapping additional veteran resources known as the "West Site ABCD" and resources that had the potential to provide veteran services known as 'Austin Military Families". In addition to mapping the veteran resources, the project also includes a series of maps aimed at identifying the veteran population throughout Chicago with Austin as the primary area of focus.

The normalized veteran population by census tract map shows the veteran population throughout Chicago. The analysis shows that there is a significant veteran population in the southern region of Chicago as well as the northwestern region of Chicago. Austin is highlighted in green since MVP desired to have a focus on the Austin Community Area. Within Austin, there are a significant amount of veterans especially in census tracts located in the west and south. These results are not unexpected given MVP focus in the Austin area as well as their desire to create a stronger site in the southern region of Chicago. The implications of this map are that MVP should continue to strengthen their network within Austin, but also look towards creating additional resources in the northwest and south side of Chicago.

The final report for this community GIS project can be viewed here. Also click here for an interactive web for MVP networks.