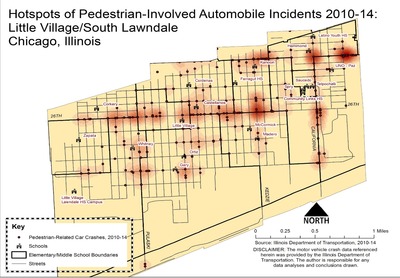 The project was performed in conjunction with the non-profit called Enlace Chicago, located in the Community Area of Chicago called Little Village, or South Lawndale. Enlace recently began an initiative to better understand where safe routes to school infrastructure and programs are most needed in Little Village. The goal of the project is to collect and analyze indicator data for walkability in Little Village in order to show benefits and/or areas where walkability infrastructure improvement is needed. The results are shown with maps depicting the variabilities that potentially impact safety along school routes. GIS data analyses were performed on the collected data, and maps were created to show the results of the analyses. Hot spot analysis was used to depict pedestrian crash in Little Village, as these variables would have strong negative influence on walkability, especially for children.

As seen above, the areas of highest accident concentration can be found along almost the entirety of West 26th Street, which is a highly-traveled corridor for both automobiles and pedestrians, as well as the main business corridor for the neighborhood. Additionally, California Ave and Cermak Ave are also areas of concern particular concern. Schools that may be most impacted by these hotspots include Corkery, Little Village, Castellanos, McCormick, Kanoon, Hammond, and UNO-Paz.

The final report for this community GIS project can be viewed here.