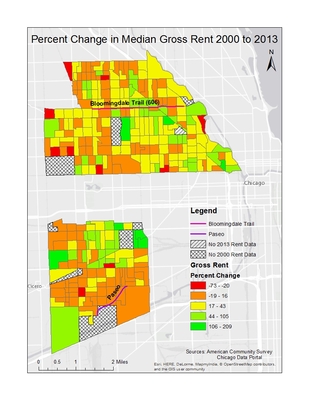 Little Village Environmental Justice Organization (LVEJO) is a community-based organization primarily concerned with addressing issues of environmental justice in Little Village, a blue-collar community that is primarily Mexican and Mexican American. One of the recent projects LVEJO has been involved in is the planning of a possible multi-use trail to increase green space in Little Village, encourage walkability in the neighborhood, and provide options for economic development.

Similar projects, like the High Line in Manhattan and the 606/Bloomingdale Trial in Logan Square in Chicago, have provided insight into possible outcomes for the Little Village Paseo. LVEJO’s main concern with development of the Paseo is that it will drive gentrification in the neighborhood and force out lower-income community members. LVEJO is interested in visual tools that will generate discussion regarding changes in the community.

One set of maps was created to show rent data from 2000, 2013 and percent change over that period. These maps reflect changes in neighborhood affordability. Data on rent and household income was pulled from Census Data available from the American Fact Finder. Money values from 2000 were converted into Constant Dollar Values for 2013 using the Consumer Price Index. Census block spatial data, used to visualize rent and income data, was downloaded from the Chicago Data Portal.

The concept of the 606 Trail largely entered public consciousness in the 2002-2004 years, with a non-profit organization, Friends of the Bloomingdale Trail, formed in 2003. Articles dating back to 2011 report on housing investment and renovation activity in anticipation of the Trail's development. Therefore data from 2000 appropriately depicts surrounding demographics unaffected by the 606 Trail and data from 2013 should appropriately portray the effects that the Trail is beginning to have on the neighborhood.